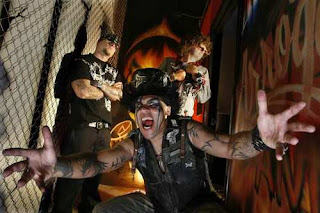 Although Newport Police would not release the name of the car crash victim pending notification of next of kin, press representatives of the San Bernardino County-based company confirmed Lewis had passed away on Monday evening, with the following statement:

It is with heavy hearts and great sadness that we must regretfully confirm the passing of our beloved friend, brother and co-founder Charles 'Mask' Lewis following a car accident that occurred last night. We are currently in the process of setting up a memorial service in his honor and will release more details as they become available.

Many thanks to all for the outpouring of blessings and well-wishing during this incredibly difficult time.

I first met the San Bernardino native and his Tapout brethren -- who go by the names SkySkrape (real name unknown) and Punkass (a.k.a. Earl Caldwell) at an MMA expo in Long Beach last August as part of my Image section cover story about the boom in MMA apparel.

I spent several hours with him after that, each time walking away impressed how much he seemed to be genuinely grateful for each fan, clasping their hands in his, mugging for photos, hoisting toddlers on his broad shoulders for snapshots.

He seemed to be afraid of disappointing them. If initial reports are correct -- that he was racing his Ferrari against a Porsche before he died Wednesday about 1 a.m. -- his passing will have done just that, shuffling off this mortal coil as flamboyantly as he strode through it.

He was always quick with an analogy. I remember something he said when I asked about the future potential of MMA brands: “If this is the Yellow Brick Road and Oz is in the distance, we’re still trying to go up the path to find the Tin Man, Scarecrow and the Lion."

But even in my brief encounter with him, I could see something deeper and more meaningful behind the face paint and floppy camo hat. At one point before I left the Tapout compound in Grand Terrace last August, Lewis sat across from me in the conference room. After a question about the spiritual undertones of the sport -- the good vs. evil, the abundance of crosses and crusader imagery -- he leaned forward, flashed a wide Chesire Cat smile, and whispered almost conspiratorially. "We all want to feel like we're David taking on Goliath." For a brief instant, I had met the man behind the Mask.

It's a shame that so many MMA fans will mourn the passing of the outsized gentle giant with the drill-sergeant demeanor and and so few will have had the rare privilege to see the man beneath it.