Features and Products of Google 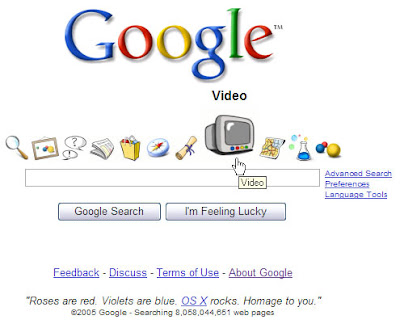 I know everyone knows about Google and it is very popular but for a quick recap, here are the features of Google as they were just starting in the World Wide Web.

The origin of google.com Google came out with AdWords in 2000 to provide advertising facility to small businesses. It is a keyword based self-service ad program which can be activated with online by help of a credit card within a few minutes. In February 2002 Google included cost-per-click (CPC) model which made search advertising economical for both small and large businesses. Google AdWords works very well as the ads reach only the people who are using keywords which relate well to that particular ad. This approach has made AdWords extremely popular. After announcing that it's going to launch Gmail soon, Google filed for an IPO (initial public offer) with SEC on April 29, 2004. The Google IPO was offered to public on August 19 through Dutch auction process. In October first quarterly results of Google were announced showing revenues to the tune of $800 million.

The origin of google.com Google introduced the Google Toolbar in 2000 making it possible for surfers to use Google search without visiting the Google webpage. One can also search by right clicking on text within a web document. With help of Google Toolbar keywords can be highlighted in search results. Since its launch the Google Toolbar has been very popular and downloaded by many millions. It also blocks pop-ups and translates webpage into English.

The origin of google.com In 2003, Google introduced Google AdSense which offered a means to earn revenues on web sites by placing ads along with contents. Google AdSense automatically analyses the content of the web page and places ads which are relevant to the web page increasing the chances of the link to be clicked by the viewers.

The origin of google.com Froogle was launched in December 2002. It helps the user to many source of a particular product by searching through all the relevant websites. Along with the product information it provides price and images for that particular product.

The origin of google.com On April 1, 2004 many thought that the announcement by Google to come out with a mail service providing 1 GB storage space was a joke. But soon Gmail was launched and left "Yahoo!" and "hotmail" far behind. It used AdSense to provide relevant ads next to mail messages. It provides a search facility to help you look up for a particular message. You can also chat without downloading any software from the mail page with people you already mail. Currently Gmail offers more than 6500 Mb of storage space.

The origin of google.com

The first version of Google Desktop Search was released on october14, 2004. It is a free application which can easily locate files like emails, web history, photos etc in your computer. In a later version released in 2005 it also has the capability to locate PDF and mp3 files. It's available in many languages including English, German, French, Spanish, Italian, Chinese, Korean, Japanese and Dutch.

The origin of google.com In 2005 June Google Earth was launched. With help of Google Earth any desired location on earth can be seem. All you have to do is type in you house address, press search and you will be able to see the location. Location of schools, hotels and restaurants can be had from this site along with directions as how to reach the place.

The origin of google.com In August 2005 Google Talk was released which provided a free application to communicate with each other via instant messenger along with providing quality voice chat.

Google uses both hardware and software solutions to make its search engine faster. The hardware part is achieved by networking together of thousands of low cost PC together so as to give huge computing power. On the software side, Google uses PageRank to rank web pages. It is a system of ranking web pages and was developed by Larry Page and Sergey Brin while they were at Stanford. When a web page, say A, gives a link to another page, say B, it is interpreted as a vote by page A for page B. Along with taking into consideration of the number of votes received by a web page the page that casts the vote is also taken into consideration. It means that some when some important site provides link to another page it is sure to improve its ranking.