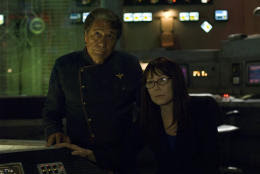 Being a huge fan of Sci Fi channel, Battlestar Galactica is one of my favorite show but it bid goodbye to everyone. I will miss watching it and hopefully Sci Fi channel will produce this kind of series again.

One of the best science-fiction series ever put on television closes out Friday, March 20, as Battlestar Galactica ends its four-season run with a two-hour finale. In a galaxy somewhere south of it, Star Wars: The Clone Wars, an animated series on the Cartoon Network, ends its first season on a ratings roll.

So the question is: Are we ever going to see something in the middle of these two series? BSG (as its fans call it) was able to capture viewers who didn’t identify themselves as lovers of sci-fi. And the George Lucas project Star Wars: The Clone Wars has drawn both kids and adults. But with one idle and the other departing for good there’s no science fiction on broadcast television right now worth watching. A glimmer of hope surrounded Joss Whedon’s Dollhouse, but the series is larded with conceptual failure and bad acting. Its counterpart on Fox’s schedule, Terminator: The Sarah Connor Chronicles, was once viewed as can’t-miss material but has since faded badly in the ratings. Either the two shows will be the combined beneficiary of Fox’s largesse or they’ll go down the drain together.

There are plenty of other series amalgamated into the sci-fi genre even though — aside from the long-running Doctor Who — most are not what mainstream viewers would call “science fiction” and none is making much noise in the ratings.

More importantly, none of them are making a critical impact like Battlestar Galactica, a superb drama that bears almost no resemblance to the cheesy late ’70s series of the same name. Ronald D. Moore “reimagined” the series in 2004 for the Sci-Fi channel and slowly the word spread to the mainstream that something special was happening on this genre show.

The series managed to be a thrilling, dense and evocative home for stories about existentialism, race, religion, war, friendship, the search for identity, family, politics, tribalism and, sure enough, science fiction. The writing, acting and visuals on BSG elevated it to the stratosphere of creative television — a series worthy of top 10 lists that encompassed network, ad-supported and pay cable. (The good news for people who haven’t seen one frame of it is now you can start renting or buying the DVDs and working toward the finale that has so many die-hards anticipating tonight’s end game.) An executive at another ad-supported cable channel once wisely said if BSG had another million dollars to spend on each episode it wouldn’t be any good. What he meant was that tight budgets forced the writers to shy away from stereotypical space battles and bluster, focusing more closely on the storytelling. That’s why BSG managed to cross over and appeal to mainstream TV audiences. The series deftly balanced the kind of mythology that fuels sci-fi enthusiasts with dramatic arcs that enthralled fans of more terrestrial fare. As soon as viewers found out that the bulk of the stories surrounded a phalanx of nuanced characters, they bought in.

Because BSG elevated science fiction to high art you’d think TV executives would be searching for something similar to it. Despite the acclaim BSG garnered, there’s a fear of trying to do something too dark or moody, traits that drew critics to the series in the first place. And while cops, doctors and lawyers are dominating the current pilot process, some networks are giving sci-fi a longer look. ABC is remaking V about an alien invasion (based on a miniseries from the ’80s) and Flash Forward, based on a science-fiction book by Robert J. Sawyer — but written for the small screen by Brannon Braga (the latter-era Star Trek series) and David S. Goyer (Batman Begins, the story for The Dark Knight). Fox is making Human Target, based on the DC Comics character who assumes the identity of those he’s trying to protect. And NBC is developing Day One, a futuristic series that picks up after a global disaster.

But on the small screen, sci-fi breakthroughs are rare. It could be that V or Flash Forward or Human Target ignore special effects and fantastical gibberish and really focus on the narrative, the character development, the writing, acting, directing and the sustaining of an original vision from season to season. That’s how you achieve greatness. But even most non-genre series come to realize brilliance is a fantasy they can’t attain. Which makes Battlestar Galactica all the more stellar in comparison.