I use to follow Pacman's fight when I was still in the Philippine. Generally, he is my countrymen, we live in the same place particularly General Santos City. I am really looking forward to his fight this coming December 6, 2008 against Dela Hoya..Here's some glimpse about Pacman's preparation: 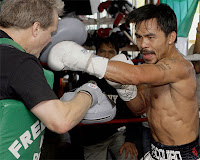 LOS ANGELES — At the end of Manny Pacquiao's long workout at the Wildcard Boxing Club in Hollywood, after the 100 or so lucky fans who have been waiting outside in the parking lot have been let in to see their hero, Team Pacquiao calls for a moment of silence.

Then Pacquiao walks to one corner of the ring, bows his head into the ropes, and the noisy gym becomes respectfully silent.

A minute or so later, Pacquiao raises his head and walks across the ring, smiling at the admiring crowd.

Pacquiao, the 29-year-old Filipino lightweight champion who is considered the best pound-for-pound boxer in the world, repeats this routine daily as he prepares for his much-anticipated showdown in Las Vegas on Dec. 6 against Oscar De La Hoya.

The ring prayer represents half of what Pacquiao says makes him such a great fighter, a fierce competitor who started as a 106-pound teenager and has held world titles at 112, 122, 130 and 135 pounds.

The other half is what he has just done in the two hours before his prayer — a grueling, non-stop workout focusing on speed, strength, strategy and endurance.

"What I have done in my career," he says, "is because of my hard work and my belief in God."

It's a career that would take a quantum leap if he can take down De La Hoya at 147 pounds, the welterweight limit. Pacquiao has never before fought in a division higher than lightweight, where the limit is 135 pounds. De La Hoya will presumably have an advantage in power, as well as in height and reach. So it is De La Hoya, though he is six years older, who is considered the favorite.

That's precisely why Team Pacquiao believes a victory will be a turning point for the feisty southpaw who is a national hero in his native Philippines.

"Twenty years from now, 30, 40 years, I want my name to be at the top level of boxing history," Pacquiao says. "That's why it's really important for me to win this fight. It's the biggest fight of my career.

"The point of this fight is to do something that people will never forget."

Freddie Roach, Pacquiao's longtime trainer, says a victory "would elevate Manny to superstar status. He's not quite there yet. This is definitely a turning point."

Their strategy to pull off the upset is partly obvious and partly a secret Roach says he learned when he trained De La Hoya in a losing effort against Floyd Mayweather Jr.

"It's no secret Manny has to take the jab away from Oscar, get inside the jab, fight at short range," Roach says. "Oscar is a distance fighter. He has long arms. I don't think it's a huge problem. But it is our biggest problem.

"And it's no secret we're going to attack the body first and break him down."

So what is the secret?

"All the techniques we apply right now, we don't tell to anybody," Pacquiao says. "Just me and Freddie only."

Roach says this much: "I know why Oscar's jab in the Mayweather fight stopped working. Mayweather didn't make an adjustment. Oscar forgot to do something."

"You'll see," Roach says. "That's part of our game plan, of course. It will happen in the fight."

The much-discussed jump in weight is really much ado about nothing, Pacquiao says.

As for a game plan if Pacquiao wins, Roach says he'd like Pacquiao to fight twice more.

"I'd like to see him fight Ricky Hatton (the 140-pound champ) and beat Hatton, which I think we can," the trainer says. "I think Floyd Mayweather will come back. I'd like to see Manny fight Floyd and beat him, and then call it a day. He'd have nothing else to prove.

"He'd be considered one of the greatest fighters of all time. He'd be a champion in five weight divisions."

How does that sound to Pacquiao?

Posted by addyforest at Wednesday, November 26, 2008