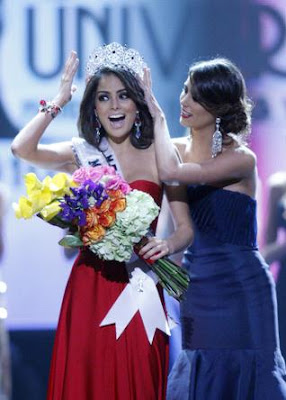 Ms. Navarrete, dressed in a red gown with a flowing train, impressed judges by highlighting the importance of teaching children about family values.

She was followed by Miss Jamaica Yendi Philipps while Miss Australia Jenista Campbell was the second runner-up at the 59th annual pageant held here on Monday.

Miss India Ushoshi Sengupta (21) from Kolkata did not make it to the top 15; neither did Miss USA Rima Fakih, who had grabbed international headlines for being the first Muslim American to represent the U.S. in the competition.

Asked by Olympic gold-medal figure skater Evan Lysacek how she felt about unsupervised Internet use, Ms. Navarrete said the Internet was important but parents needed to be careful and watch over their kids.

As part of her winning, she will get a luxury New York apartment with living expenses, a one-year scholarship to the New York Film Academy, jewellery, clothes, shoes and an undisclosed sum of money.

“I want to give my parents a big hug. There was a lot of effort and a lot of sacrifice,” she said at a press conference after winning the title.

Ms. Navarrete has been a model since she was 15 years old and is only the second Mexican beauty after Lupita Jones (1991) to win the title of Miss Universe.

Her win earned her a congratulatory message on Twitter from Mexican President Felipe Calderon.