Battle to halt BP oil spill is nearing its end 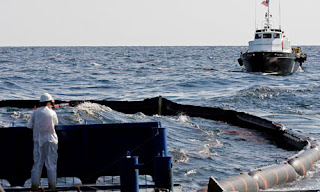 The multi - billion company BP is now rejoicing. As I have read on the news they are now celebrating the momentum that their problem is coming to an end. The oils lick has finally stop and hopefully it will continue.

Today the President has declared the US's largest and most politically embarrassing oil spill near an end as BP said it had reached a "significant milestone" in its efforts to permanently seal the Deepwater Horizon well.

"The long battle is finally close to coming to an end, and we are very pleased with that," said the president, who was strongly criticized for what was initially seen as a slow and weak response as millions of barrels of oil poured into the Gulf of Mexico.

BP said it had completed a process known as static kill, in which heavy mud was pumped in to plug the stricken well, producing a "textbook" result.

BP still faces an as yet undetermined number of compensation claims, which Browner said the government was determined to see it meet. "We are going to continue to ensure that BP is held accountable for the damage that they did, for the economic losses and ultimately for the natural resource damages and all of the restoration that will take place in the Gulf communities and in the Gulf at large." The company also has to settle with the families of 11 workers killed in the explosion on the Deepwater Horizon oil rig that set off the spill.
Posted by addyforest at Wednesday, August 04, 2010