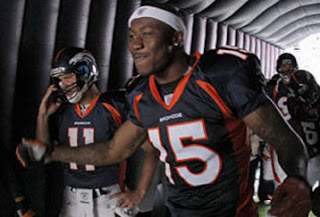 Marshall is no longer the No. 1 receiver on the Broncos, heck he's not even on the first team now. Second year phenom Eddie Royal has taken the No. 1 receiver spot, with veterans Brandon Stokely and Jabar Gaffney following him respectively. This move may not just be due to injury though, it may act as a precursor, to the very near future. Foreshadowing in the drama blockbuster that is Brandon Marshall's playing career, and really, whole life.

Marshall was moved off the starting string yesterday, which could be seen in a few different ways. First, he's just injured, and since he won't be practicing, it's a good way to get the other guys comfortable in those spots. Especially if Marshall misses significant time during the season. Second, Marshall was taken off the roster because he's hurt and has a court date coming up on Thursday. If Marshall is found guilty, he will likely miss a good part of the season, up to eight games, which again gets the next guys in line playing time at their new positions and learning the new routes and formations that come with McDaniels' arrival. Third, and most intriguing, this move of Marshall from No. 1 overall receiver to second-stringer signifies the Broncos possibly shopping the disgruntled receiver around. Maybe McDaniels is fed up with Marshall's "injury," brashness, and likely inability to learn the multitude of plays put in front of him.

Brandon Marshall is a superb talent, but is he worth it? Is he worth all this negative media attention, in a year Denver has already been shelled by the national and local media alike? Is he worth the "rockstar" attitude that he and many other prima donna NFL receivers bring with them? Is he worth the fumbles, plays taken off, and weak work ethic? Perhaps yesterday in Dove Valley McD and CO. finally thought, "no." Or perhaps Marshall just needs a few days rest.

I may be paranoid, but I wouldn't be surprised if Marshall is gone in the next few days.