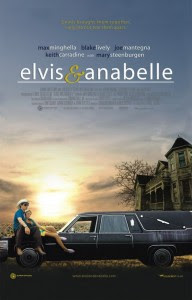 In Elvis and Anabelle, every terrible tragedy brings about something equally miraculous. Groomed by her overly ambitious mother who had also previously been a Miss Texas Rose (Mary Steenburgen), Anabelle Leigh (Blake Lively) is on the road to winning the Miss Texas Rose tiara when she dies as a result of her eating disorder during a pageant. Her death lands her on the embalming table of Elvis (Max Minghella), an embittered young man whose sense of family duty and love for his ailing father (Joe Mantegna) keep him from following his dreams. When Anabelle is miraculously resurrected on Elvis’s embalming table the two unexpectedly connect and sparks fly. With the help of each other and Elvis’s father, they discover love, freedom, and happiness as the real world and their own demons threaten to force them apart.
The film premiered on March 10, 2007 at the South by Southwest film and music festival in Austin Texas.
Posted by addyforest at Sunday, August 02, 2009

Hi Ady, I am so sorry to hear about you being in and out of the hospital. What happened to you?
But I am happy to hear that you are doing fine now.
I noticed that you were not on your blog for a long time. I thought it was because you already got job.