A US Airways jet crashed 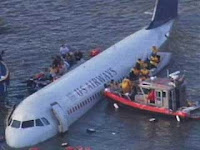 A US Airways jet crashed Thursday in the Hudson River in New York City after a flock of birds struck its engines, but everyone aboard survived.

Passengers were sent fleeing into the icy, 35 degree, waters when the Airbus 320 went down shortly after takeoff near 48th Street in Manhattan.

Two of the jet's engines were hit by a flock of birds, according to government officials. The Federal Aviation Administration said everyone on board survived and was off the plane.

Two of the jet's engines were hit by a flock of birds, according to government officials.

There were eyewitness reports the plane may have flown into a flock of birds," said FAA spokeswoman Laura Brown. "Right now we don't have any indication this was anything other than an accident."

An air traffic controllers union official said the pilot reported a "double bird strike" less than a minute after takeoff and was headed for an emergency landing in New Jersey when he ditched into the Hudson River.

National Air Traffic Controllers Union spokesman Doug Church says the plane reported the bird striked about 30 to 45 seconds after takeoff from New York's LaGuardia Airport and asked to return to the ground. As the controller began to turn the aircraft, the pilot radioed that he saw an airport below him and asked what it was.

Church said the controller in Westbury, N.Y., replied, "That's Teterboro." The pilot asked to land there. The last transmission between the pilot and controller was the controller's order to divert to Teterboro, N.J., for an emergency landing.

Doug Parker, chairman and chief executive officer of US Airways Group, would not speculate on what caused the incident, but said at a press conference that the company will fully cooperate with investigators.

Most of the passengers were held at the New York City ferry terminal at 42nd Street after the crash, though at least two were taken away on stretchers. The New York City Fire Department said 78 people were injured, but the extent of the injuries wasn't immediately known.

Flight 1549 had just taken off from New York's LaGuardia Airport at 3:26 p.m. Thursday when it went down. The flight had 150 passengers and five crew — two pilots and three flight attendants —on board, and was heading to Charlotte, N.C., said Parker, who was leaving for New York.

The plane was submerged in the icy waters up to the windows but remained completely intact. Rescue crews opened the door and pulled passengers in yellow life vests from the plane. Several boats — including commuter ferries — surrounded the plane, which appeared to be slowly sinking.

Passengers could be seen standing on the wings of the jet floating in the water immediately after the crash.

A number of Bank of America Corp. and Wells Fargo & Co. employees were on board the flight.

Wells Fargo spokeswoman Mary Eshet said three employees of the San Francisco-based bank were on US Airways Flight 1549, and all are safe.

At Charlotte-based Bank of America, spokeswoman Nicole Nastacie said the nation's largest bank was confirming the whereabouts of its employees and working with authorities to gather more information.

The U.S. Coast Guard said they are assessing the fuel situation on the plane, and working with several other agencies on a plan to salvage the plane.

The FBI and the Department of Homeland Security said terrorism wasn't suspected.

"There is no information at this time to indicate that this is a security-related incident," Homeland Security spokeswoman Laura Keehner said. "We continue to closely monitor the situation which at present is focused on search and rescue."

Witnesses said the plane's pilot appeared to guide the plane down.

"I see a commercial airliner coming down, looking like it's landing right in the water," said Bob Read, who saw it from his office at the television newsmagazine "Inside Edition." "This looked like a controlled descent."

New York City firefighters and the U.S. Coast Guard were responding to the crash.

"I saw what appeared to be a tail fin of a plane sticking out of the water," said Erica Schietinger, whose office windows at Chelsea Piers look out over the Hudson. "All the boats have sort of circled the area."

A team of US Airways employee volunteers are helping the passengers and crew who were affected, Parker said.

Posted by addyforest at Thursday, January 15, 2009