Puso (hanging rice) is a dish originating from the province of Cebu in the Philippines, a local form of the Ketupat found in other parts of the Malay world. It consists of rice wrapped in coco leaves which is then boiled. It is served by slicing the coco leaves in half exposing the rice. Puso rice pieces are strung together and servers just cut them off and slice them in half for serving, hence the term “hanging rice.” 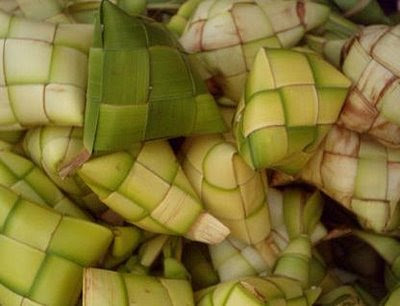 Local stories passed down through the generations have attributed the creation of this style of rice preparation to the Cebuano seafarers' need to keep cooked rice from spoiling during long sea voyages. The coco leaves used in wrapping the rice are always shaped into a triangular form and stored hanging in bunches in the open air. The shape of the package facilitates moisture to drip away from the cooked rice while the coco leaves allow the rice to be aerated and at the same time prevent flies and insects from touching it.

Puso, according to a Cebu Normal University(CNU) professor, had been once considered food for the gods, before Spain colonized the Philippines and introduced Christianity. The professor, however, said this ritualistic preparation of puso as divine offering is virtually non-existent today.

"Puso" has continued to be popular in the Philippines due to the large number of open-air eateries serving grilled chicken and pork meals. Customers of these establishments often worry about the cleanliness of the food being prepared hence the popularity of "puso" where the rice remains untouched by human hands after being cooked.
Posted by addyforest at Friday, January 23, 2009

Thanks for you great BLOG.

I would like to offer you a link exchange with my website which is related to your site.

Please let me know if you are interested or check http://www.anewdayrehab.com/ and mail me here anewdayrehab@gmail.com

Be in touch.
Michael Raines