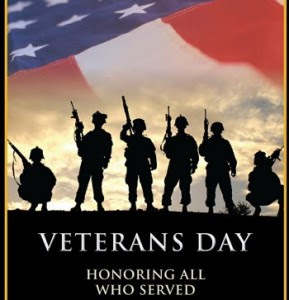 Today, we are celebrating the day for the Veterans. But what's really the history of Veterans Day?

It was known as "the War to end all Wars". The first world war is considered today as the event which has had the greatest social and political impact in the annals of human history. It has been estimated that more than 61.5 million soldiers from all nations took part in the war, of which 8.5 million were killed, 12.5 million received recoverable injuries, and 7 million were permanently injured. The United States, which entered the war late, suffered among the fewest losses, at approximately 116,000. Nevertheless, the impact the war had upon Americans was great. President Wilson, who boasted that he would keep the United States out of the war, shocked the country with his request for war. November 11, 1918 marked the official end of the war. One year later, President Wilson proclaimed November 11, 1919, as "Armistice Day". It was the first nationwide commemoration of the war. On November 11, 1920, England laid to rest an unknown soldier in Westminster Abbey, a way to commemorate their losses in the war. France had carried a similar act the same year at the Arc de Triomphe. On November 11, 1921, the United States followed-up...Read More

Posted by addyforest at Wednesday, November 11, 2009